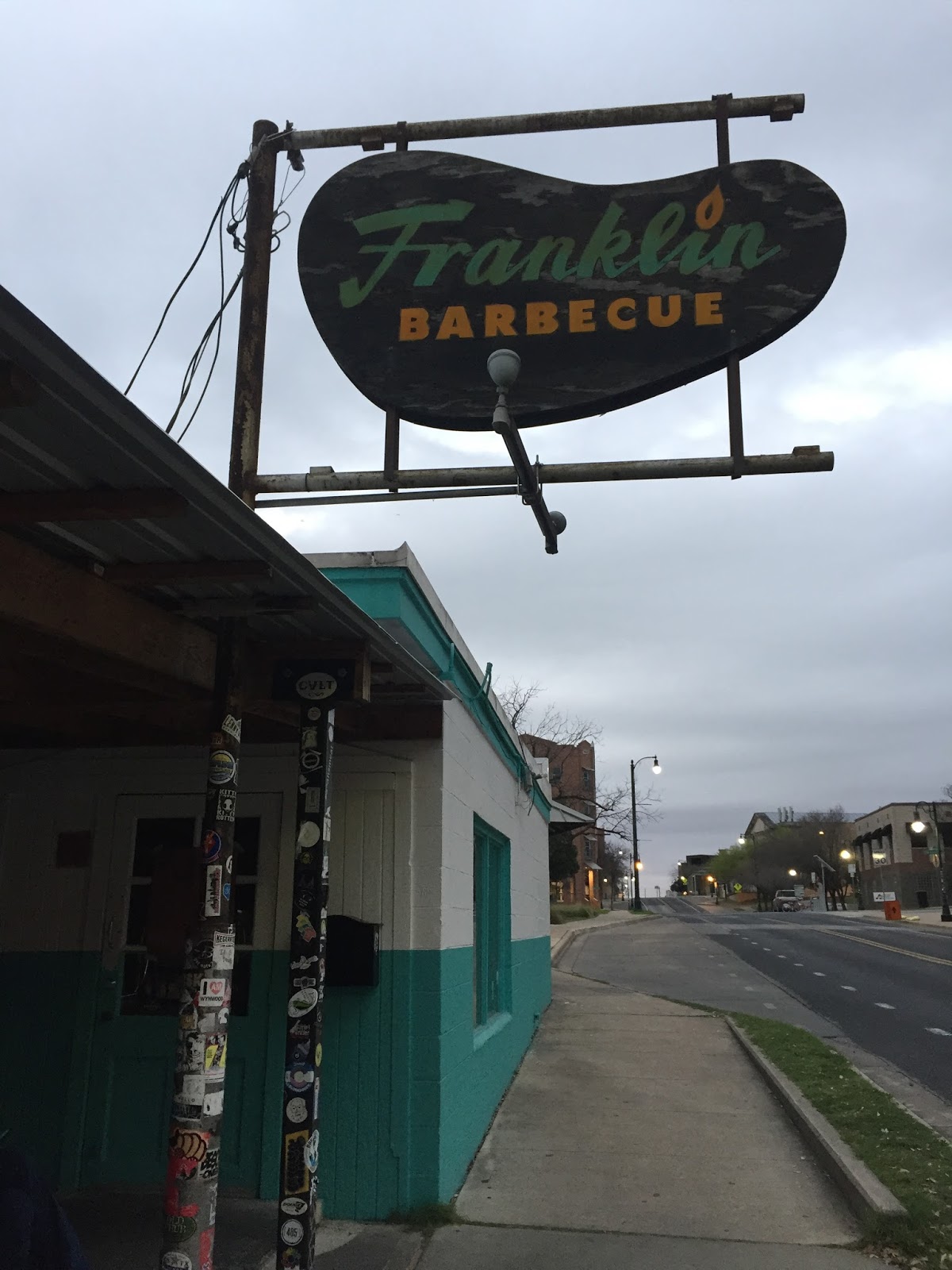 Aaron Franklin.  In just a few short years, the name has become synonymous with barbecue excellence.  His restaurant in Austin is as famous for its brisket as it is for the daily hours long lineup to get a taste of it.  They insist on using only the highest quality meats and smoke that brisket for up to 18 hours.

Reading Franklin’s book, Franklin Barbecue – a meat smoking manifesto, you find out that the insistence on using only the best extends to the post oak used to slow smoke that marvellous meat.  Aaron worked tirelessly in his early days of business to find a wood supplier that could consistently provide him with the best possible product.  The attention to detail starts with the wood and the fire and extends to every process of the cook.

The day before, while in Taylor, I bought a cheap folding camp chair at Walmart.  I planned to be in line early Sunday morning and I didn’t want to stand or sit on the ground.  The evening before, I had stopped by the Franklin location on my way to Stiles Switch, just to check out the spot and the parking situation.  At that point I noticed that they have a corral full of camp chairs for the guests to use while in line.  Luckily the chair only cost $10, so not a big deal!

I set my alarm for early Sunday morning and grabbed a couple of pastries, a yogurt and an apple from the hotel continental breakfast on my way out the door.  Franklin talks about the daily line up in his book and I had been reading about it on Twitter for months.  The line up has its own Twitter feed and I had heard stories of people paying others to stand in line for them.  It was also a weekend, so the line up would be longer than on a weekday.  From what I had heard and read, I expected the line up to start 4 or 5 hours before the 11:00 am opening.  I pulled into the parking lot about 6:30 am…crickets.  Nobody in sight.  Not another car in the parking lot.  My immediate thought was that I could have slept more.  I stayed in the car and ate my breakfast.  Within 10 or 15 minutes, two other cars pulled, much to my relief!  I finished my yogurt, grabbed a chair from the corral and got into the lineup.  6:45 am and I was the third chair in line!

The folks ahead of me were a husband and wife from Connecticut.  She had been to Franklin before but this was his first time.  The other car was a younger couple from a little ways outside Austin.  He was headed off to Arizona for school and wanted to hit Franklin one more time before going away, so he and his girlfriend had made a weekend trip.  You see, the Franklin lineup has kind of become a thing of its own.  I mentioned the Twitter feed.  They have a sign on the wall letting guests know that the line is BYOB friendly.  As the line grew longer and longer that morning, people were making a social event out of it.  A young couple a little ways back from my spot in line were drinking bloody mary’s.  They had recently moved to Austin from Florida and spent a good amount of time talking with two guys ahead of them in line about the local bbq scene.  Groups were using their coolers for card games.  It was a really neat scene.  Around 8 o’clock the staff turned on some music and shortly after someone came out to let us know that a door was unlocked and we could go in to use the washroom if needed.  The cash was also open for those wanting to buy souvenirs prior to opening (hat and t-shirt added to the collection!).

The great thing that they do is around 9:00 or 9:30, a staff member comes out and starts going person by person through the lineup, taking an inventory of what everyone figures they will be ordering, and how much.  Using this info, they will cut off the line at some point, letting anyone beyond that point know that they will likely not get any food that day.  The downside of low and slow cooked barbecue is that when it is all gone, it is all gone.  There is no throwing a few more steaks on the grill.  Since opening the restaurant around 2010, Franklin Barbecue has sold out of barbecue every day.  The previous day’s sold out sign was still up on the door when I got there.  Closer to opening time, someone else came out selling beer and a few times during the line up staff came out, greeting the guests, answering questions and making sure everyone was doing ok.  From a business model standpoint, I would say they have about mastered the whole guest experience thing.  The lineup creates a buzz of its own and their actions help make it a fun, friendly and social experience.

With all of that said however, the lineup and the buzz would not exist without the food.  If the barbecue wasn’t any good, none of it would happen.  The lineups started before Franklin had moved into the current building.  The restaurant started out as a trailer that Aaron and his wife Stacy had built into a food truck.  Shortly after opening, Daniel Vaughn gave them a glowing review and the rest is history!

A few minutes before 11:00, the chairs made their way back into the corral and we stood, eagerly awaiting the main door being unlocked.  Finally, it was time.  After almost 4.5 hours in line, I will admit that I was a little bit giddy with anticipation!

The door opened and in we went, along the back wall and past the souvenir display and then down the side wall up to the counter to order.  I placed my order, watching the cutter expertly slice the brisket and pork ribs that I ordered.  A side of baked beans, white bread and pickles on the side along with a mini pecan pie for dessert.

I joined the Connecticut couple at a table and it was time to eat.  The previous day, I had eaten brisket at two of the finest BBQ joints in Texas and it was outstanding.  Somehow, this was just a little bit better.  It is tough to explain just how, but it was.  It is also difficult to explain how a simple piece of bbq meat is worth waiting 4.5 hours in line for, but it was.  The pork ribs were outstanding in their own right, but the brisket was the star of the show.  Franklin uses a 50/50 salt and pepper rub on the brisket and it is elegant in its simplicity.  The beans were good, the pie was excellent (not house made, they bring it in from a local bakery), but the rest of the meal was overshadowed by the fabulousness of the brisket.

I’m happy to say that I have experienced the Franklin line, and I would absolutely eat there again…just not sure I’ll wait 4.5 hours in line again. The food was outstanding and the whole experience was first rate.  In 2013, Texas Monthly named them the top BBQ joint in Texas and the new rankings released just a couple of weeks ago have them at number 2.  In my mind, they are undeniably deserving of such lofty status and braving the Franklin line up is a BBQ bucket list item I’m happy to cross off my list!